“Picture of the day”

Yesterday our crew, Shaun and Mario took our vessel Damara II for the 12h00 excursion.

As they were running along Keurbooms Strand they came across a lonesome pod of 9 Indo-Pacific Humpback dolphins, the largest of the 3 dolphin species in our bay.

As the boat was traveling alongside them, they played in the surf.

This is unfortunately a dying species as they pick up agricultural poisons in the River Mouth and estuaries as they feed.

The female passes the poison on to their young, through their young  as they suckle.

They never reach full maturity as they die young. 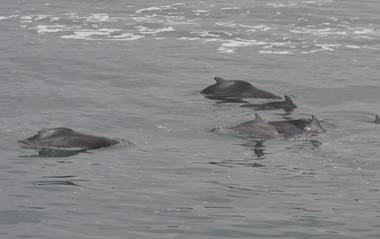