Noise in the marine environment. 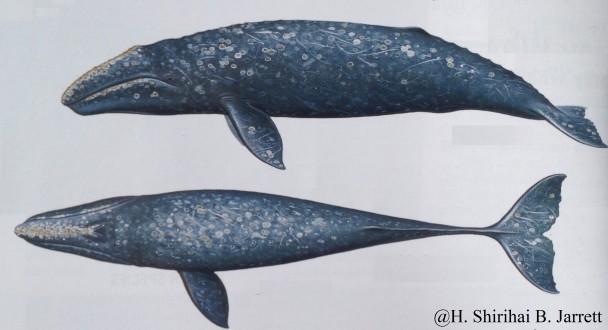 The marine environment is threatened by overfishing, ocean acidification, chemical pollution  and plastic debris . Another significant problem faced by the marine environment is ever increasing noise levels. Most humans are unaware of these sounds and it appears that the ocean is quiet. Natural sounds such as the calls of whales and dolphins are familiar to us, but there are many sounds that are inaudible to the human ear resulting in the misconception that the oceans are quiet.
Marine animals often rely completely on sound because of the limited visibility underwater. This is because light can’t travel as well as sound in the ocean. Most animals will therefore use sound in the ocean more than their sight. Cetaceans (whales and dolphins) depend on sound to survive and use it for foraging, communication, detecting predators and navigation. Humpback whales are famous for their elaborate songs, thought to be used for attracting mates, and dolphins use echolocation for navigating and finding food. Since the industrial revolution, the anthropogenic (man-made) noise levels in our oceans have increased due to the increased use of the sea through shipping, military activities, oil and gas exploration and advanced fishing activities. Not all noises have harmful effects on marine life because of the large variation in hearing ranges and sensitivity to sound and also because some species depend on sound more than others for navigating, foraging and finding mates. The type and level of sound can also vary greatly depending on depth and proximity to the shore. In general humans can hear in the range of 20 Hz (Hertz) – 20 kHz, large whales 7 Hz – 22 kHz, dolphins 150 Hz – 180 kHz and seals 75 Hz – 75 k Hz. The pile driving frequency of oil and gas drilling machinery is below 1kHz (mid – low frequency).

The main problems that occur with increased noise in the ocean is that when animal’s communicate by using sound, these are drowned out by louder, more intense industrial sounds that can travel vast distances. Additionally, since animals use sound as a tool for detecting predators, an anthropogenic sound of similar frequency and intensity can trigger a stress response and cause the animal to flee or panic unnecessarily which can be extremely costly energetically and even causing them to abandon their current habitats. In extreme cases, anthropogenic noise could lead to hearing reduction or complete loss of hearing which would ultimately result in the death of the animal that could no longer feed or navigate.

It is difficult to determine which sounds are harmful to particular marine mammal species because the frequencies at which certain species can hear have not been identified. . At present it is assumed that whales and dolphins can hear within the frequencies that they can produce, but that does not mean that sounds outside of their hearing range are not harmful to them. Captive studies on Belugas and some dolphin species have been done and the hearing ranges of these are now known. This is one of the few positive justifications for captive facilities because the results of these studies have positive conservation uses for the species in their wild habitats.

A typical response to stress (in this case sound) by most animals is to change their natural behaviour or habitat. One clear example of this was found for Grey whales (Eschrichtius robustus) in Baja California. They started leaving their primary breeding bays between 1957 and1964 due to salt extraction from the lagoon mouth in the bay. From the start of the salt extraction activities, the number of whales in the bay started dropping and after 1964 no whales where seen in the bay until the 1980’s (even though the salt exporting stopped in 1967). Fortunately for this species there were other nearby bays for them to occupy, however it is often the case that alternative habitats are not available and breeding and feeding grounds that are essential for a species survival are permanently destroyed. Reduced reproductive success, particularly for endangered species, can lead to the extinction of local populations.

There are two major categories of human sound in the ocean, unintended and intended (measuring tools). The unintentional sounds come from ships, drilling platforms as well as the construction and development of wind, wave and current energy collectors. Intentional sounds come from tools used to find information, such as naval sonar, fisheries, the oil and gas industry, oceanographers and geologists.