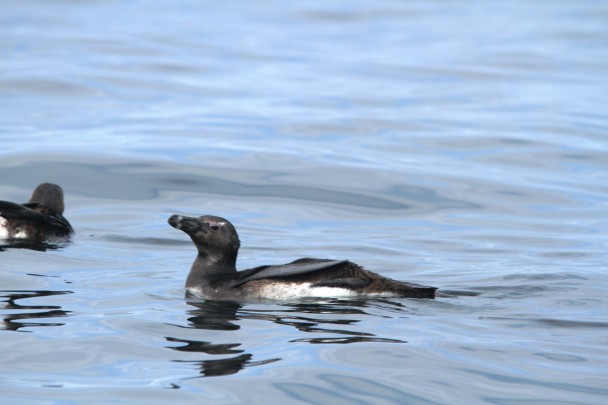 In South Africa there is one penguin specie that lives and breed along the shore line called the African Penguin (Spheiscus demersus). The King Penguin (Aptenodytes patagonicus), Southern Rockhopper Penguin (Eudyptes chrysocome), Northern Rockhopper Penguin (Eudyptes c. moseleyi) and Macaroni Penguin (Eudyptes chrysolophus) can also be seen in South African waters on rare occasions.
African penguins are also known as Black Footed Penguins or Jackass Penguins for its donkey-like call. The African Penguin is (as all penguins) unable to fly, but with their streamlined body and stiff flat wings it looks like they fly under water while swimming. They are recognized by their black facial mask and white stomach with black dots. These black dots are as unique to each penguin as human fingerprints. They also have a pink patch of skin above their eye that changes in color due to the penguin’s temperature. When a penguin’s body gets hot, more blood is sent to the gland to get cooled down by the air surrounding the head.
African Penguins are great divers and feed primarily on fish (Pilchards and Anchovies), squid and small crustaceans. They normally hunt within 20km off-shore and consume up to 540 grams of food per day. When raising their chicks their food consumption can be more than 1kg of food per day.
African Penguins are found along the South-West coast of Africa, living in colonies on 24 Islands between Namibia and Algoa Bay (South Africa). There were 2 colonies established by penguins in the 1980´s on the main land in Cape Town (Boulders Beach) and Betty´s Bay (Stony Point). It’s believed that mainland colonies only were possible, because of the reduction of predators. Since you can swim with penguins on Boulder beach it’s a popular spot to interact with them. African penguins are monogamous (only has one partner all their life) and will return to the same nesting beach every year. They have two different breeding seasons. In South Africa it is from March to May and in Namibia it is from November to December. The eggs are laid in borrows and both parents incubate the eggs for about 40 days.
There were roughly 1.5 million African Penguins estimated in 1910 and only 10% remained in the beginning of 2000. The total population of 200,000 in the year 2000 dropped to 55,000. This steep decline will make the African penguin extinct in the next 20 years. Since 2012 they been classified as endangered. In 2008 it was estimated that Namibia had 5,000 breeding pairs and in South Africa 21,000 pairs.
One of the reasons that African Penguins are endangered is because of the collapse of the Pilchard fishery in the 1960´s. Pilchard is an important food source for the penguins. They started to eat more Anchovies after the collapse but it’s not ideal for them because it is lower in fat and protein than pilchards. African Penguins are protective over their chicks, but will not sacrifice themselves for the chicks. If the food is hard to find the parents will let the chick starve rather than starve themselves. This has led to fewer chicks surviving and the population decreasing even more.